I’ve continued to have fun graphing my baby’s sleep times with data recorded from her fancy bassinet. We’ve had some… interesting… experiences learning about our infant’s sleep patterns and how they change over time. The plots today show the shift from our baby’s time napping to time sleeping at night.

Previously, I visualized our baby’s sleep times in Python and made a pretty image using R. This week, I’ll confuse the heck out of everyone by using Python libraries that bring R’s great ideas to Python. Will this be a beautiful moment of cross-programming-language unity? Will it just be confusing for everyone? Read on to find out! 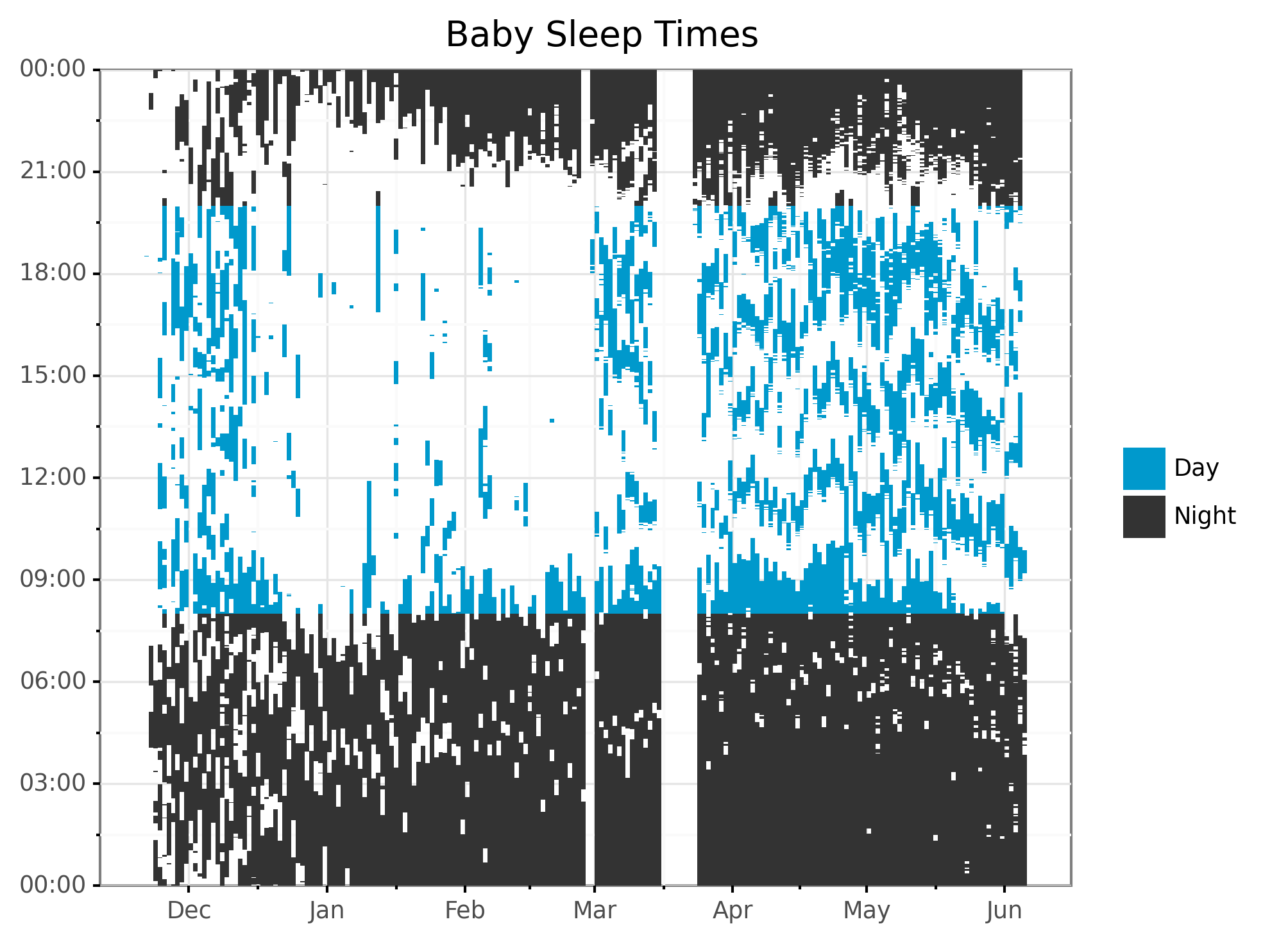 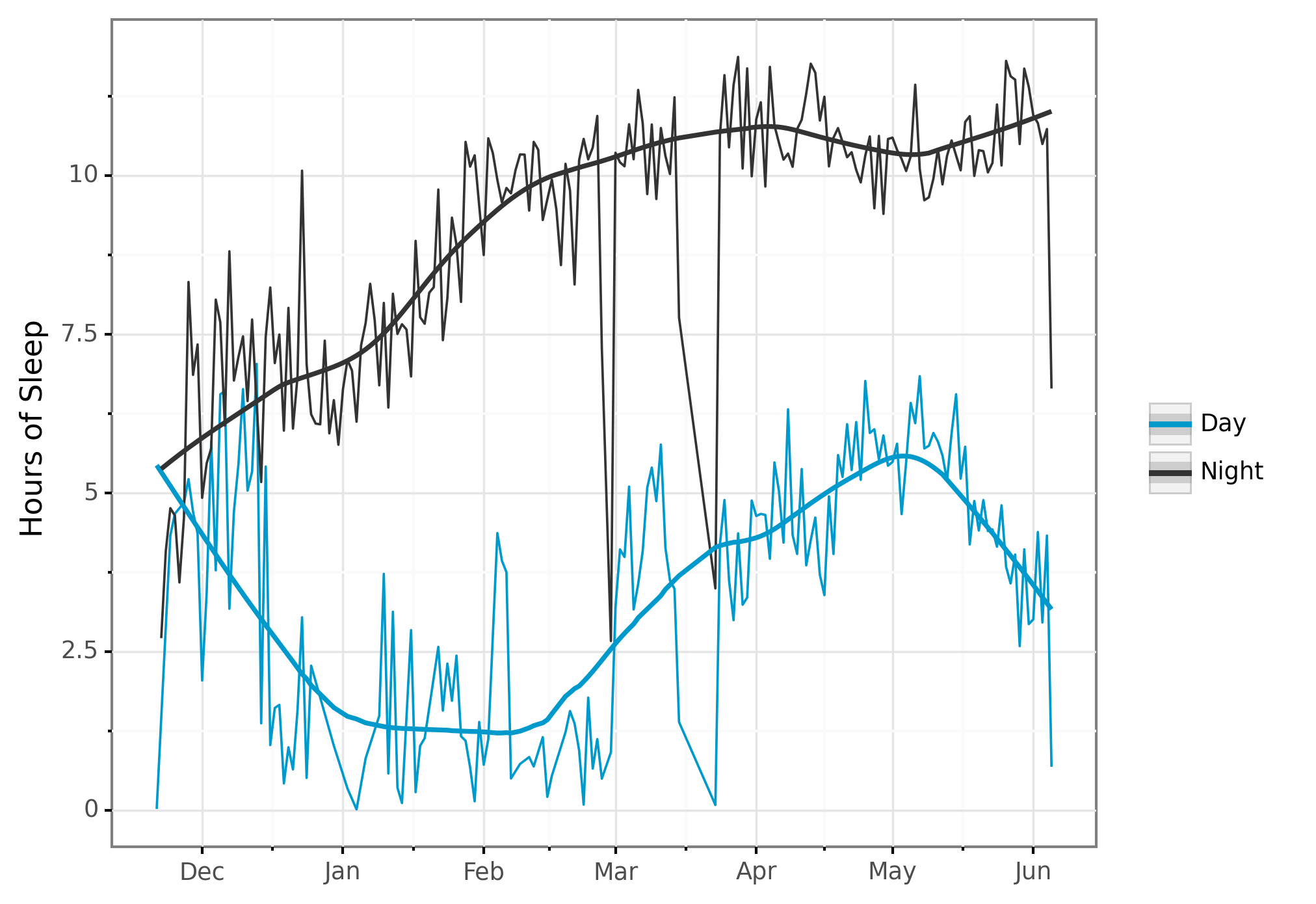 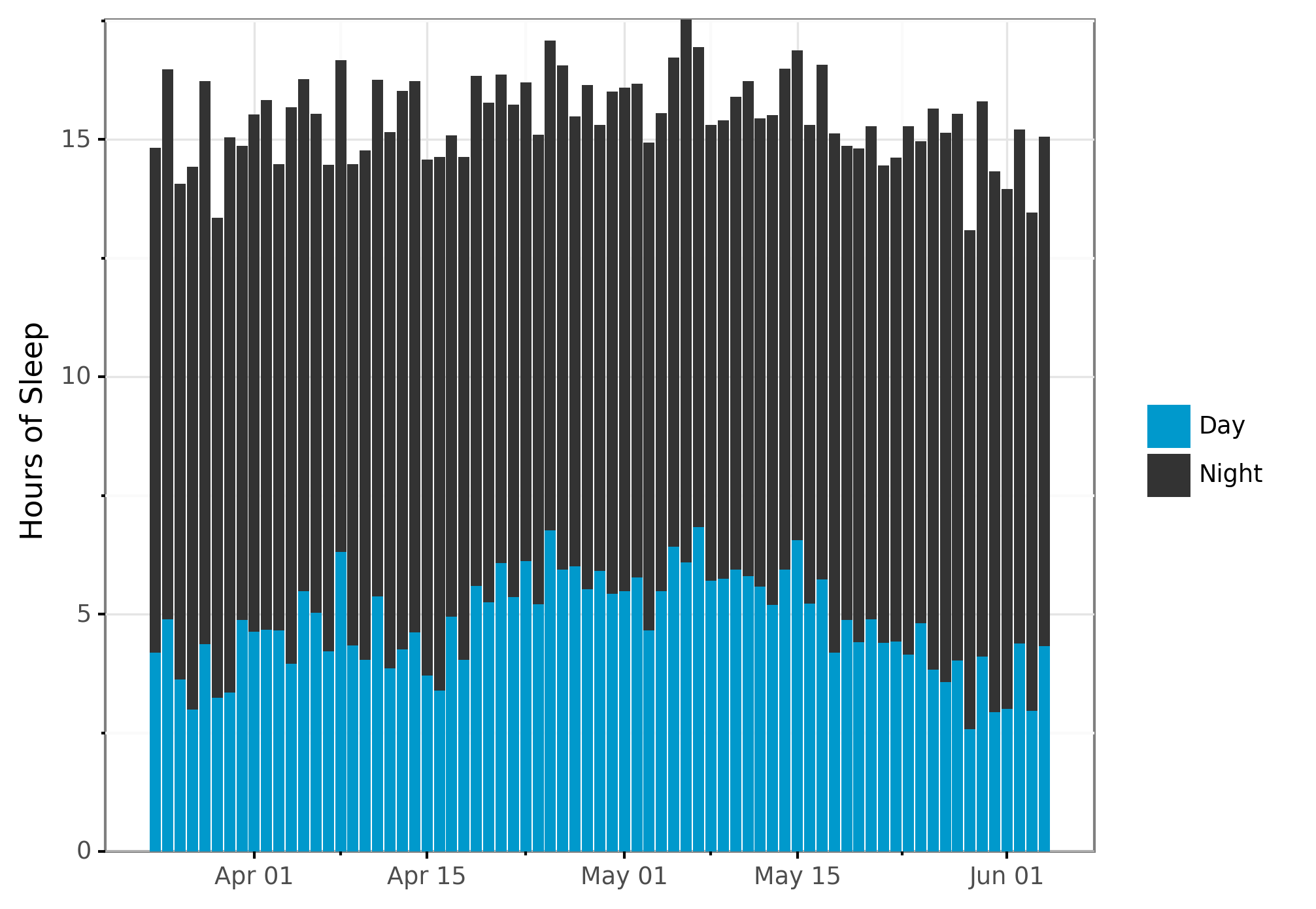 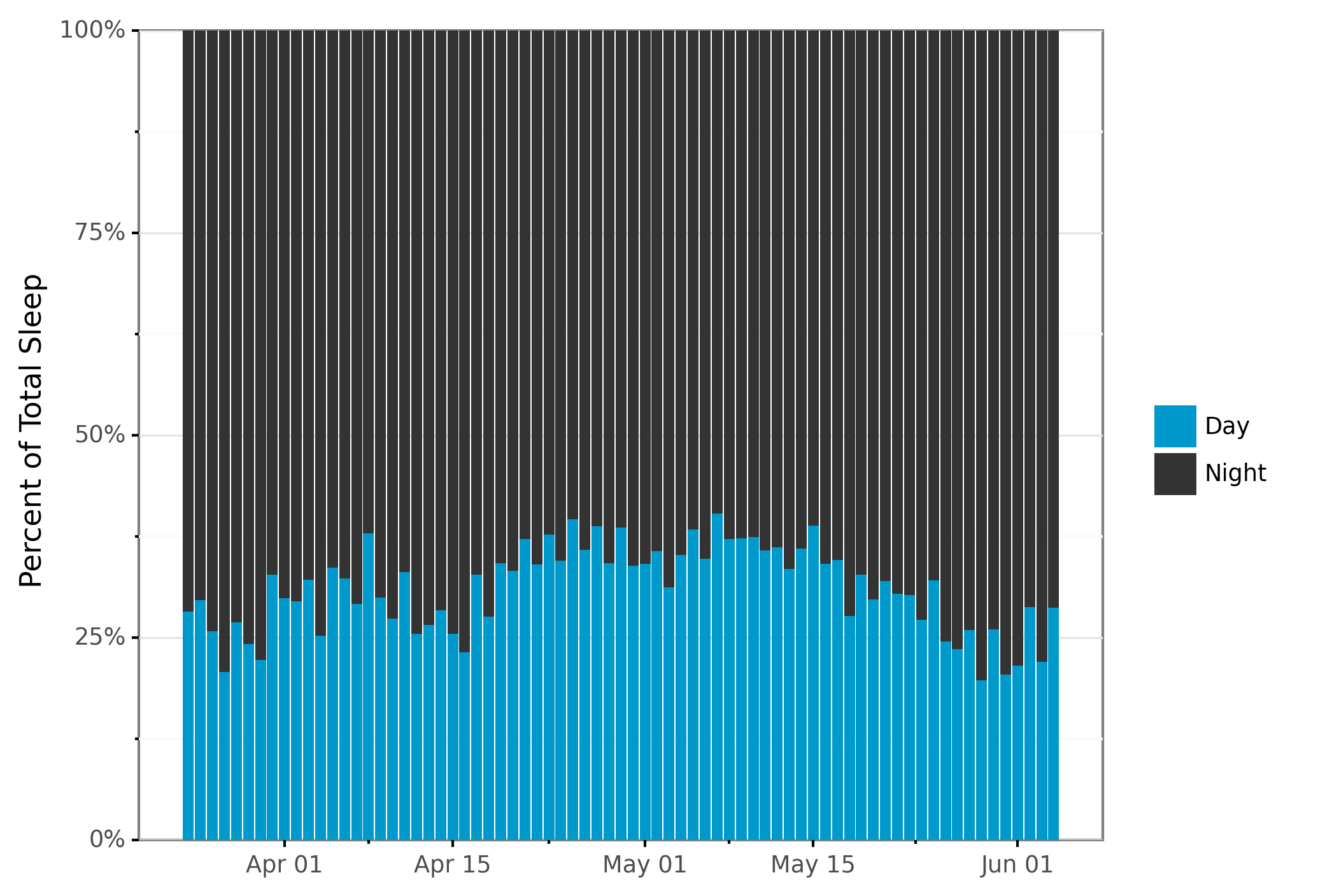 Enough of looking at pretty plots… how did we make them?

Before we dive into the code, I’ll mention that this code will look weird to Python programmers and eerily familiar to those who use R’s dplyr. Some day in another post I’ll break down why I like R’s dplyr library and how learning it made me a better data scientist! The 5 minute summary is that most data manipulation only uses a few crucial operations. Dplyr (and it’s Python equivalent, siuba) break these operations into a few functions that operate on a dataframe:

These operations can be done in pandas (there are many websites comparing pandas and dplyr). I like dplyr because a few features make my coding closer to “speed of thought.” In dplyr and siuba, a dataframe is piped thorugh a series of the above commands, in siuba using the >> operator. The _ variable is used to refer to the current dataframe in the pipe. This makes it easy to manipulate a dataframe in multiple ways in one statement without having to make and keep track of multiple variables. If this all feels a little fuzzy, please take a look at the code below, and stay tuned for some future love-letters to R :).

I should mention that I attempted to port dplyr to python as well, with the dplython library, however, due to fatherhood and a fulltime job I haven’t put much time into dplython recently, and I’m happy to see siuba exists!

First we have imports and some constants. You’ll notice the * imports, which isn’t typically good Python style. However, it makes the code much less verbose and I think makes sense for data analysis style coding. We load in our data and do some basic type conversion.

The split_times function tackles the same challenge we faced in my earlier post: how do we make sure a time period doesn’t cross midnight? I’ve taken roughly the same logic as the previous post but using siuba syntax instead of vanilla pandas.

What the code is doing is the following:

We add a few columns with just the time of day (not the full date and time) and convert to an easier format. Also, crucially, we label each time period with whether it took place at night or during the day. I’ve defined “night” as 8pm to 8am and “day” the opposite. This doesn’t align with most of my behavior most of my life, but works well enough for the baby’s schedule.

Next, I recreate a plot from the original post, but color the rectangles by whether the time is day or night. This is mainly to make sure I didn’t have any bugs!

I pulled colors from the excellent Palettable library. As a style point that others might disagree with, I like to remove labels and titles when I think graphs are self explanatory. The tick marks from the x-axis clearly show this is time, so why waste space writing “Time”? The values clearly show night or day, so why put a title on the legend? Etc.

This is where I think siuba really shines. I have many sleep sessions for each day. My goal is to compute summary statistics for each day. In one statement, I:

I love how easy it is to add a per-group trendline by simply adding + geom_smooth() to the plotting code.

Now for each day I calculate the percent of total sleep that is during the day or at night. Again, I can write this in one statement of chained together functions:

I love getting the per-group summary of total sleep time and applying it to get within-group percentages. I’ve typically had to do this by doing some yucky joins with multiple dataframes in pandas (though I imagine there may be smoother ways now).

If you enjoyed this post, consider signing up for email updates in the menu on the left or following me on Twitter.